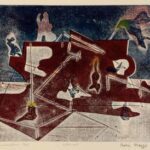 Born 2 Nov 1902 in Ukraine, Margo was a painter of surrealist imagery. In 1919 he enrolled at the Polytechnik of Art at Odessa, and in 1924 received a grant to study at the Workshop for the Art of the Future in Moscow. He then studied the work of the old masters in the Hermitage.

In 1928 Margo emigrated to Montréal, where he worked as a muralist for a year. Moving to New York City in 1930, he studied at the Roerich Museum and two years later began teaching there.

He experimented with celluloid and acetone in his printmaking and was an early user of the “decalomania” technique in oil painting. In 1943 he became an American citizen.

This is: Reconstruction, from the Portfolio #1