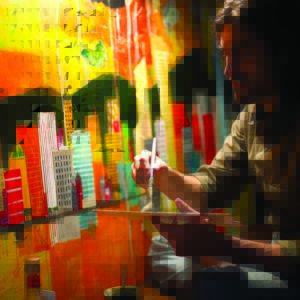 Francesco Lietti has been living in Hong Kong since early 2006 and his love of this vibrant, eclectic city is immediately apparent in his works, which derives from the mnemonic imagery of the artist, who lives in symbiosis with the themes of travel and discovery.

When first visiting Hong Kong in the summer of 2005, the painter experienced an overwhelming sensation: fascinated by the variety of colors, the rich smells, and the plethora of images he was drawn to return and stay. This exciting metropolis is something you cannot just put into a frame: something would spill out; something would be missing; one can catch the details, but he or she would never be able to capture the entire picture. The artist portrays this through simple and direct forms. He paints naïve visions that often have a humorous quality, describing the city in an almost caricatured magnificence. Through the use of striking colors the painter captures the essence of Hong Kong’s famous harbor skyline and makes it his own. His paintings hover between reality and fantasy. Using strong blocks of paint to represent the buildings, Lietti also includes smaller patches of textured color, which dance across the cityscape, giving it that dream-like, ephemeral quality. The artist works in acrylic and oils on canvas and also adds collage to give his paintings texture and depth. He then finishes his pieces with a thick, glossy resin, further enhancing the brightness of the colors.

Lietti also captures the colors and delights of other Asian destinations. The lush greens of Vietnam and Bali, the golden sunsets of Rajasthan, the deep blue seascapes of the Philippines, these are just some of the many places he has visited and experienced. The artist gives us rare glimpses, merging reality with a magical world.

Francesco Lietti was born in Lecco on the southern shore of Lake Como in Italy. He studied architecture in Milan and furthered his studies in Paris at the École des Beaux Arts, La Seine, and also at the Clerkenwell College of Printing in London. His works are featured in private collections worldwide. When not painting in his studio, Francesco is probably riding his motorbike on the Hong Kong hills trying to catch a new view or travelling across Asia in search of inspiration.

Commission an Artwork from Francesco

Have you got an idea or photograph that you’d like as an artwork ?

Francesco would be happy to work with you to develop your own special unique piece of Art.