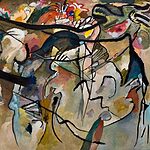 Born 4 Dec 1866 (according to the Julian calendar that the Russians were using at the time) in Moscow, Kandinsky claimed to be the first abstract painter, with this work, Composition V. It’s viewable in the MoMA in New York. His Blue Rider painting had already showed the direction he would later take, and he formed the distinguished group of the same name with artists such as Macke and Marc. Undeniably influential, he used colour as an expression of emotion, and is said to have likened the process of painting to composing music.