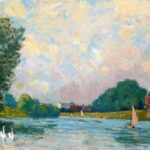 Born 30 October 1839 in Paris, Sisley counts as one of THE great impressionsists. Although he was born and spent most of his life in France, he still retained British citizenship. He was possibly the most consistent of the Impressionists in his dedication to painting landscape “en plein air”. He deviated into figure painting only rarely and, unlike other big name Impressionists such as Renoir and Pissarro, he found that Impressionism fulfilled his artistic needs.

Some of his important works are paintings of the River Thames, mostly around Hampton Court, painted in the 1870s, and many landscapes depicting rivers in France, often in or near Moret-sur-Loing. His paintings of the Seine and its bridges in the former suburbs of Paris are like many of his landscapes, characterised by tranquillity, in pale shades of green, pink, purple, dusty blue and cream.